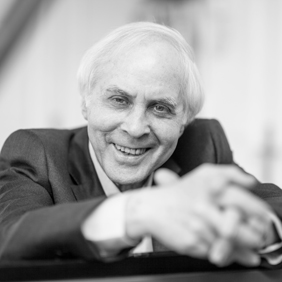 Vladimir Tropp was born in Moscow in 1939. He studied at the celebrated Gnessins Music School from an early age. His teachers included the distinguished Russians Moisey Feigin and Teodor Gutman, both pupils of Heinrich Neuhaus. While still a student, Tropp began giving recitals and performing with orchestras. He was awarded the prestigious Rimsky-Korsakov scholarship.

In 1963 Tropp graduated with distinction from the Gnessins State Musical Institute, since named the Gnessins Russian Academy of Music. He continued his graduate studies while teaching there. Today he is known as one of the leading professors of this major institution of professional music education. In 1997 he was appointed chair of the Academy’s piano department. For the last ten years he has also taught at the P. I. Tchaikovsky Moscow State Conservatory. In his teaching Professor Tropp strives to maintain the finest traditions of the Russian school of piano playing. Several of his students have won major international competitions (Leeds, Long-Thibaud, Busoni, Tchaikovsky, Hamamatsu, Reine Elisabeth de Belgique, Van Cliburn...)

In 1970 Tropp was a laureate of the International Enesco Piano Competition in Bucharest. Since then, he has constantly performed and held master classes in Russia and many other countries: the Netherlands, Italy, Japan, Finland, the USA, German, the UK, Ireland, France, Czechoslovakia, Portugal, Canada, Costa Rica, Taiwan and Southern Korea.

Romantic music comprises the major part of his repertoire. His performances of works by Rachmaninov, Scriabin and Medtner are widely acclaimed. The celebrated pianist Lazar Berman wrote that Tropp “is a singular and subtle artist. Sincerity, an outstanding sense of poetry, improvisatory freedom, rhythmic flexibility, a highly coloured pianistic sound – these are the essential traits of the powerful artistic persona of Vladimir Tropp.”

Tropp has made a series of radio, LP and CD recordings. From 1995 onwards the Denon Company (Japan) produced ten CDs of works by Schumann, Chopin, Brahms, Tchaikovsky, Rachmaninov, Scriabin and Medtner. In 1998, one of his series of three CDs entitled “Russian Miniatures” was awarded the prestigious “Record Academy” prize for best classical recording of the year.

Tropp is a musician with wide-ranging interests. He has published work on the performing arts of Russia and other countries, as well as articles on the recordings of outstanding performers, and made a series of radio broadcasts. Most prominent among Professor Tropp’s activities has been the study of Sergei Rachmaninov’s creative work. He has examined all extant archives of the composer in the United States, Russia, Switzerland and Costa Rica, publishing articles and writing and directing television films about him.